Eugène Delacroix’s The Barque of Dante | The Maladaptive Stoic

With his presentation of Dante’s Divine Comedy, which by 1824 was a well-trodden subject matter, Eugène Delacroix’s inaugural entrance to the Parison art stage was to polarize opinions within the upper echelon of the Paris Salon.  But like the Italian Poet himself, Delacroix was unafraid of controversy.  His audaciousness took on many forms, not least in his decision to explore the less-used canto VIII of The Inferno.  This harrowing composition brings together the incongruity of human reason, manifested in the central characters, and a savage vision of human suffering and desperation, manifested in the souls, who are fatalistic in their hope of redemption.  The painting demands the spectator bear witness to this all-to-familiar dichotomy: the tension between human reason and primeval emotions.  In this post, we can discuss these fascinating themes of visual tension that Delacroix externalised, and we can ask ourselves if the polarity of these emotional states can ever be truly resolved.

As soon as my guide and I were in the craft, the ancient prow went on, and cut deeper into the water, than it did with other passengers” 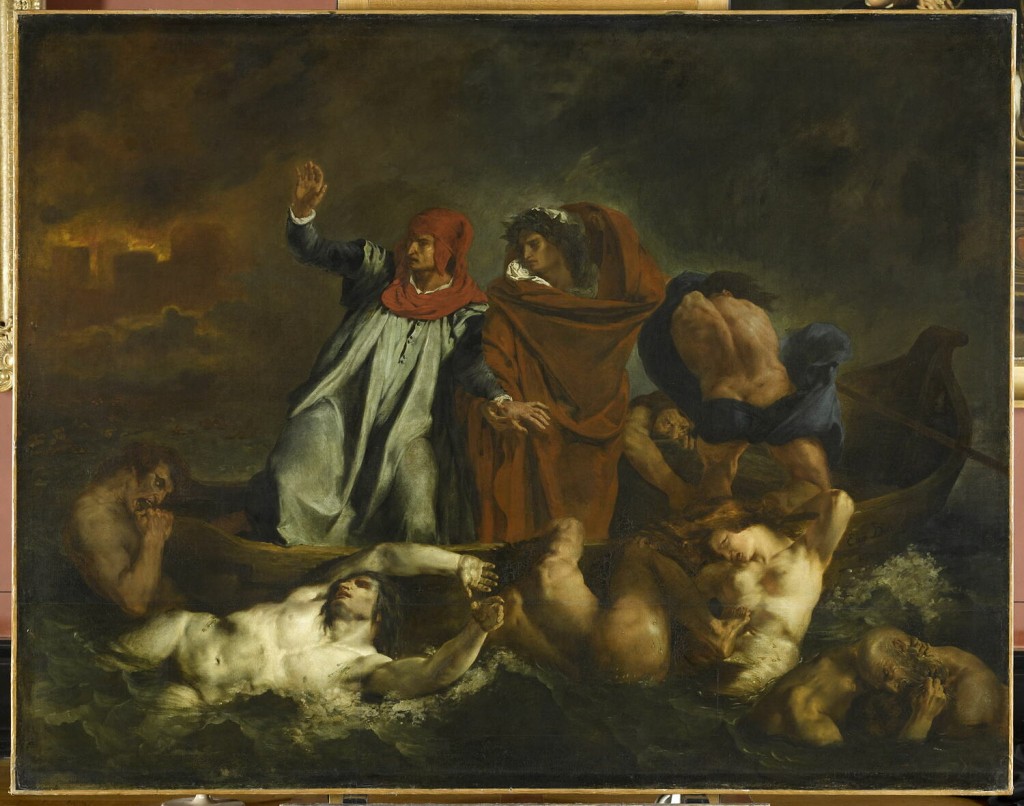 The Pilgrim Dante, the literary protagonist of the eponymous Italian Poet’s fourteenth century Divine Commedia, is in a game of brinkmanship.  His senses are becoming overwhelmed.  His adrenalin levels begin to increase as he is violently buffeted by the lashing of the waves and the bodies in the water as they collide against the boat.  He can barely hear himself think as the screams from the damned engulf his audible faculties.  Like the caged tiger whose rage builds from within, the surrounding tempest grows intensely.  Dante reacts; his animalistic instincts of fear and flight begin to overwhelm him.  From within this small vessel riding the watery turbulence, there is no escape.  Panic could be only a few moments away.  This is the narrative that Delacroix brings together.  The setting of Dante’s emotional conflict is the River Styx, as the Pilgrim, his Pagan mentor Virgil, and Phlegiàs the Oarsman, navigate the treacherous waters en-route to the City of Dis.  However, this rendering is not a literal translation of the scene from Inferno VIII, but instead, imports elements from the same and other cantos.  Delacroix’s objective?  Maybe to portray the eternal struggle of being human.  That is the battle between the intrinsic animalistic responses to the environment, the savage mind, and those faculties that separate human from animals, the rational mind.  Possibly, Delacroix wants us to feel these two polarizing emotional states in mid-struggle; the tipping point of rationality versus the instinct to survive.  This is accomplished by cleverly exposing dualities: energy contrasted against cohesion, and foreboding contrasted against calm.  These features manifest as movement, motion, and without wanting absolute chaos, the neutralising effects of stability.  Why?  To prove that even a revered character such as Dante, ever unflappable and measured, is susceptible to the maladaptive behaviours of the human condition.

This is a shared journey; Delacroix wants us to feel every part of the movement between the two points of departure and destination.  In the background we observe the City of Dis, the journey’s end, engulfed by hellish flames, north-west of our position.  A course-correction is required, forcing the vessel into an abrupt left-hand turn.  The force between boat and the current is significant.  The visual of a near-naked Phlegiàs, arched shoulder-blades and a full view of his sinuous back muscles, allow us to decern his struggle against the tide with his single oar.  He is desperately trying to gain the upper hand.  Dante is unsure of the trajectory of events, and the Stoic is rattled.  In a moment of instinctive unease, he carefully transfers his full body weight to his legs, as he pushes himself upwards and slowly rises.  Balance is not assured though; he instinctively reaches out to his Guide searching for a human anchor.  The chiaroscuro of his attire shows his legs astride, attempting to use them as ballast, pitching slightly to the right as he battles against the shifting centre of gravity.  The thick fabric of his gown melds around his well-defined left thigh, which accepts the weight, as he desperately attempts to steady himself.  The bow plunges forward, a moment away from exiting the picture frame, and it leans starboard, into the turn.  The river fiercely beats against the oak hull with great intensity.  The waters of Styx are hungry, growling like a dog.  The frothy crest of the waves, created as the water pummels the hull, stretch up to the boat as if wanting to grab more human bounty into its watery grave.  As it turns, bodies crash against the vessel.  These poor souls, in various states of consciousness, blindly cling, gnaw, and collide, drawing our attention to the pivoting of the vessel.  A naked man lower centre faces us, the turn detaching his hold on the boat, his eyes closed as he prepares to relinquish the struggle (figure 1).  His well-toned muscular physique, illuminated by the white light ravishing his body, is no match for the forces of momentum.  His disorientated companions barely retain their hold; surely in the next few moments they too will succumb.  There will be no disrupting this crossing.  The journey’s movement marches towards its crescendo, as if divine providence is propelling the passengers towards that infernal blaze. 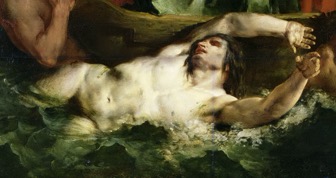 As we cast our eyes across this grand theatrical scene, there is an almost effortless ability to empathise with the Pilgrim’s growing sense of trepidation.  The secret behind this emotional resonance is the painting’s energy, and a pervasive sense of motion that Delacroix imposes.  As the passage advances towards the fiery station of Dis, the consequence of this inescapable energy is starkly felt, in that it heightens the Pilgrim’s fear in this temporal moment.  He is on unsure footing.  Delacroix skilfully integrates multiple sharp triangular shapes which subtely moves our eyes from one point to another in haste (figure 2).  He wants us to feel this disorientation, this turmoil, this foreboding.  He revels in our discomfort.  The optics are aesthetically assertive: drawn diagonally, connecting the picture planes from right to left, increasing our peripheral vision, and creating an exaggerated widening effect.  The visual speed is unrelenting.  The meteorological elements draw us in and enhances a sense of velocity.   The wind gathers strength, prowling like a hungry wolf just beyond the window.  Forms lean rightwards echoing the direction of the gale, from the raging fire in the background, to Dante himself.  We see further effects of this turbulence as it skims over the surface of the river, splattering the damned and leaving trails of water running down their naked bodies (figure 3).  Phlegiàs’ royal blue gown billows uncontrollably, coiling around him like a boa-constrictor encircling its prey.  We are drawn to the ivory hues in front-centre that form the crest of those waves, responding to the battle between air and water, promoting a sense of imbalance, as the choppy waves force Dante up and down like a musical note.  It is enough to make us feel nauseous and anxious.  As the hero oscillates back and forth, we can feel his developing fear of possible displacement, resulting from these tempestuous conditions.  Nothing is absolute though.  The Stoic still has time to reclaim his emotional equilibrium, even as the incipient motion intensifies. 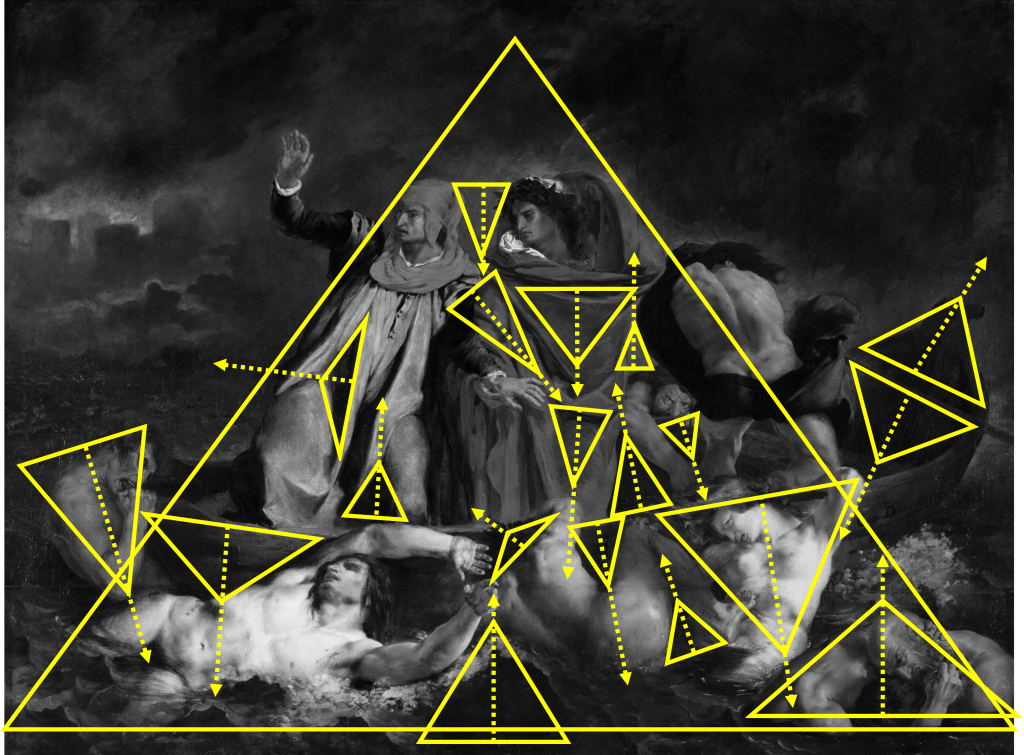 In that moment, as the realisation of danger begins to embed itself, Dante needs an emotional catalyst if he is to defeat the surge of adrenalin overrunning his rational faculties.  Dante needs an anchor, stability, and Delacroix understands this.  For although he wants turbulence, he does not want those forces of nature to overcome us.  So, he gives balance, cohesion, and security, all personified in the Pagan guide Virgil.  Unperturbed by the events unfolding around him, he is experienced in the mechanics of Hell.  Almost weightless in his stance, he gently stretches out an arm and with his hand slightly turned and open, invites Dante to indulge in his security.  But in Dante’s rising panic, and he has not yet connected.  As if a metaphor for his journey, the answer is there, but Dante needs the presence of mind to see and accept.  Virgil, in partial profile, has a pensive look which portrays his disappointment that Dante still does not yet trust in his mission.  He is seeing but not understanding.  How very un-Stoic.  But there Virgil stands, juxtaposed amid the chaos, like a painted statue, radiating strength.  He is fixed firmly in the centre, closing the composition, bringing immediate balance and harmony.  He raises his left arm, slowly bringing it over his head, as we can not distinguish between the folds of his tawny garment.  The blackening of the chiaroscuro pushes Virgil back, injecting more distance between us and him, inviting a reduction in tension.  His rectangular shape, equidistant in the centre, is deeply satisfying.  It nourishes us and exudes serenity.  The Pilgrim can sense it too, although he has yet to fully accept it.  But Virgil is ordained with heavenly foresight, and like the spider weaving the broken web, is patient.  Dante will find physical security in his guide, but the true goal is to locate true stability found within us.  It is called faith, and Virgil knows that all good things come to those who wait.

For those that have read Inferno VIII, it’s clear that Delacroix wanted to produce something that is less literal, but more real.  He wants to raise awareness of human frailty; a truly romantic notion.  For the variety of attibutes of the human condition are present in us, and we are all subject to them, even those considered the most resilient, like the Stoic Dante.  We could consider this painting as one big metaphor for life.  The darkened canvas, constantly evoking gloom and doom, is punctuated by pockets of light from the individuals we surround ourselves with.  For we are all lost at sea, washing between hope and despair, surrounded by potential threats (the perpetual burning of Dis in the background).  We are all on our own journey (movement), must navigate the treacherous turbulence of our environment (motion), whilst all desiring security and assurances that everything is going to be okay (stability).  We seek a rescuer, but ultimately the truth is there for us to find.  But it is a difficult and arduous  journey.  As Lord Byron said, “A little turmoil, now and then, is an agreeable quickener of sensation, such as a revolution, a battle, or an adventure of any live description”.

**These links and references are being provided as a convenience and for informational purposes only; they do not constitute an endorsement or an approval by The Cultural Aficionado of any of the products, services or opinions of the corporation or organization or individual.  The Cultural Aficionado bears no responsibility for the accuracy, legality or content of the external site or for that of subsequent links.  Contact the external site for answers to questions regarding its content.** 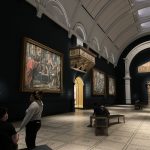 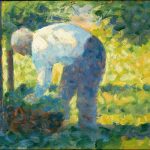