The Raphael Cartoons @ The V&A | The Accidental Existentialist

Humans are prisoners.  They are anchored to their temporality.  Fated to live within the confines of their emotions.  They are free, but still compelled to think, to feel, to act.  The artistic treatment of the human condition, with expressions of emotions and states of mind in response to the events around them, has been portrayed through visual retellings of dramatic stories and fables.  Artists have challenged, provoked, and raised questions about the conflict between humans, as free and responsible agents, and divine providence.

Raphael, the Renaissance grand master, was a visual explorer of these themes.  His cartoons of 1515, subsequently woven into grand tapestries and housed in the Sistine Chapel, depict various episodes in the lives of the apostles St. Peter and St. Paul.  One could read these as exploring this natural tension.  Which begs the question of this post: even though the term would only be invented four centuries later, was Raphael an accidental Existentialist?

A naked blade sheathed in in velvet; that was Raphael’s voice.”

As part of a major regeneration project to celebrate 500 years since the death of Raphael, and with the shadow of COVID restrictions dissipating, spectators can now experience the Raphael’s seven-cycle ‘Cartoons’, within the renovated neo-classical Raphael Court.  Commissioned by Pope Leo X for the Vatican’s Sistine Chapel, Raphael depicted various episodes from the lives of apostles St. Peter and St. Paul.  The cartoons are the design pieces for elegant tapestries, manufactured in Belgium by Pieter van Aelst.  During the Twentieth Century, these original blueprint drawings found their way into the Royal collection, and having attained near-equal celebratory status as their textile siblings, have been on display at the V&A for the ensuing 150 years.

These ecclesiastical cycles offer up a complex intersection between faith and the various human responses to it.  Each of the drawings exhibit strong themes of divine intervention, but what is equally compelling, is the strength of human reactions to those events.  Divine acts are on display, but so is free will.  The narrative complexity within Raphael’s cartoons is the perfect foil for contemporary art exhibitions; being able to look at historic paintings through a modern lens.  In this case, the focus on the unifying human states of thinking, feeling, and acting, which are exemplified in three selections discussed in this post. 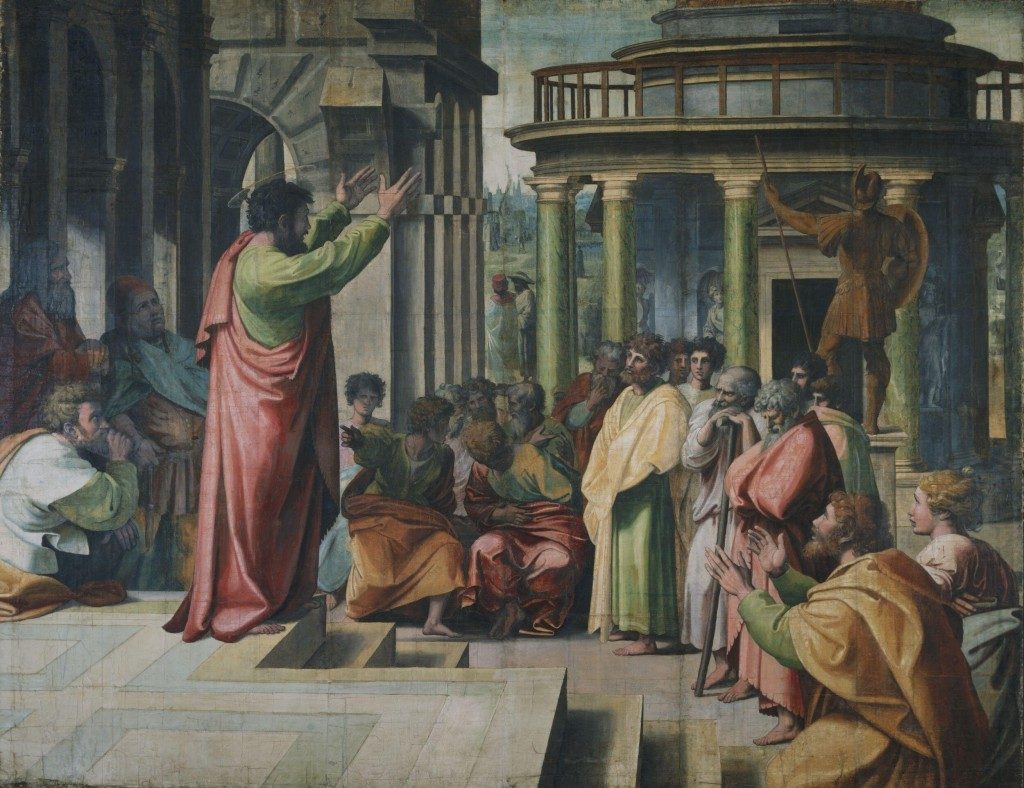 In Paul Preaching at Athens, Raphael presents a composition of dialectics and the exploration of faith; thinking manifested in a variety of reactions to Paul’s sermon.  The symmetry between the architectural setting in the painting, and the gallery in which the spectator stands, is impressive, as both promote scholarly features closely associated with the art of study and reflection.  The pensive crowd are students, and the mood is a contemplative one; a perfect equipoise of rhetoric and meditation.  The crowd listen intently, and are hypnotised into verbal submission.  A man in the foreground, arms folded, closes his eyes, internalising the words landing upon his ears, whilst others gently stroke their beards in a gesture signalling their receptiveness to new ideas.  To the foreground centre, a small cluster are already in debate; passionately gesticulating towards St. Paul whilst what appears to be a vigorous defence of their respective points of view.  One can imagine the discourse going on in the scene.  A few are already further along the cognitive process; to the bottom-right the spectator witnesses a gentleman’s moment of epiphany; skilfully illustrated by the outstretched arms, mouth open, with a direct line of sight to St. Paul – the moment of revelation has begun.  The introspection of this piece is carefully controlled by Raphael; calm permeates throughout the forms.  The persuasiveness of St. Paul is not guaranteed; man is free to think and respond, but respond he must.  Thinking, this cerebral reflex, is very human indeed.

In The Death of Ananias, the protagonist, having withheld monies from his land sale depriving the poor, pays the ultimate price in one swift act of rebuke from St. Paul, as the scene captures the moment his mortal life begins slips away.  Raphael uses sheer horror as the message transmitter, creating a chain of feelings throughout the group, in another display of visual Existentialism.  The Apostles take centre stage, elevated slightly as if to signify their higher status, their steadfast belief revealed in their stoic facial expressions, with hands gesturing towards the heavens, signalling spiritual providence.  A small cohort to the bottom right revel in their self-righteousness; looming over the doomed Ananias, smugly pointing towards the heavens and confirming the source of this retribution – almost as if to say “you shouldn’t have messed with the big guy”.  This is judicial brutality.  As Ananias’ life ebbs away, a small cluster of people to his left recoil, as if to dissociate themselves for fear of contagion.  Others look concerned but accepting in their response: better the devil you know.  His well-toned and muscled body, an icon of human strength and beauty, is rendered insignificant.  Even the modern observer cannot be immune to these feelings; the fragility of life is starkly felt through the agony of Ananias’ torment.  The epitome of Existential angst. 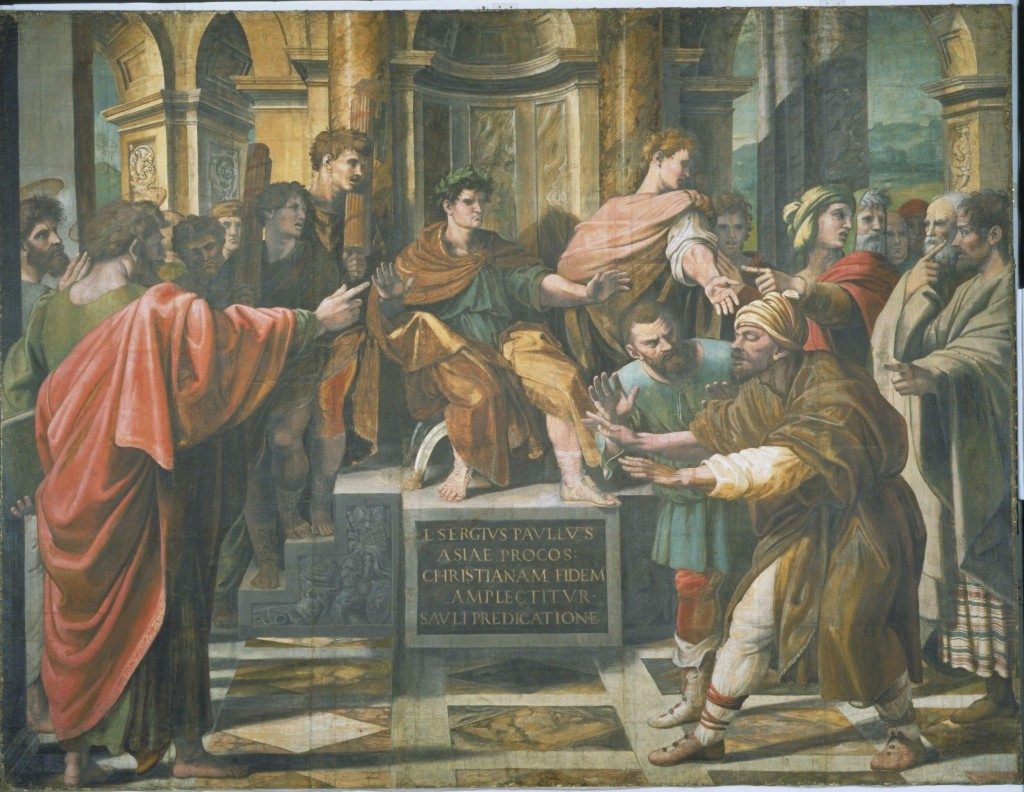 Raffaello Sanzio da Urbino, known as Raphael, “The Conversion of the Proconsul”, 1515-16, body colour over charcoal on paper later mounted on canvas, 344 x 446cm.  Image courtesy of the V&A Museum.

In The Conversion of the Proconsul, also known as The Blinding of Elymas, Raphael presents a view of humans as a divine instrument for unilateral acts.  The scene depicts St Paul’s first miracle: Elymas the Sorcerer, having ordered Paul to be punished for his faith, is struck blind by the power of St. Paul’s subsequent rebuttal.  The contemporary viewer is a witnesses to this momentary act; the tragic Sorcerer disoriented by his immediate loss of vision.  Here is the dichotomy between cause and effect.  The proclamation by the Apostles to, quite forcefully, demonstrate spiritual power, serves as a catalyst for the resulting actions from the crowd.  There is nothing like a little coercion to make emotions run high.  Gesticulations, admonishments and challenges, are all made in the direction of St. Paul at the right-hand side, reacting to his questionable undertaking.  The scene has an almost operatic quality about it; as if one is caught at the crescendo of a recitative.  What is played out in this scene is a question that has subsequently troubled Extensionists: to what degree can people be authentic when there are desires and external pressures to conform?  Figures in the background are clearly agitated and anxious; how free can they feel?  Freedom can be to choose, but causality can and will influence the act of choosing. 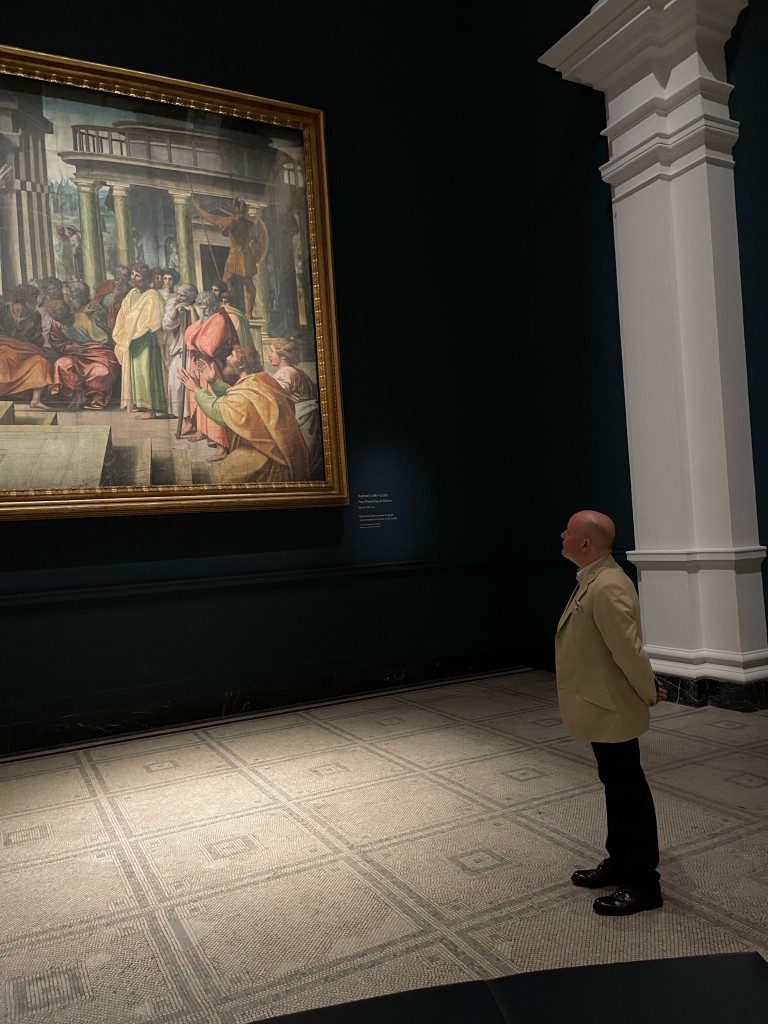 The sheer joy of this exhibition lies in one’s ability to sit, look, and reflect; to ask questions and mentally interrogate these magnificent pieces.  To deduce, in our own words, the manifesto of the visual stories.  The curators have made a plausible effort to augment this solitary exercise in discovery; skilfully and deliberately attemping to recreate the space and ambience of the Sistine Chapel in an avant-garde setting.  This is an exercise in evolving our perspicacity, and leaves the beholder contemplating with a melody of abstract history, and a set of documentaries, through the prism of today.

The Raphael Cartoons (The V&A) 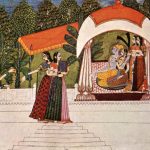 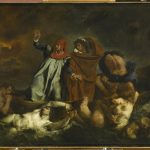