A Sceptic of Marriage? | A Visual Analysis of Sir Joshua Reynolds, Three Ladies Adorning a Term of Hymen

Upon entering the Tate Britain, one takes a brief walk through the rooms of the early twentieth century, and finally into Room 1760 located on the ground floor.  Navigating through early contemporary and romantic eras, you sense the grandeur building.  Finally, arriving in the Classical era, is Sir Joshua Reynolds “Three Ladies Adorning a Term of Hymen”.  As a seminal figure in Art History, and as a shaper of the Royal Academy of Art, Reynolds needs little introduction.  It was in 1773, that aristocrat Luke Gardiner became engaged to Elizabeth Montgomery, the eldest sister of the three Montgomery Sisters.  Famed for their reputable beauty, Gardiner commissioned Reynolds to depict these ‘Irish Graces’ within “some emblematical or historical subject”.

In this post, we will consider his striking visual themes, motifs, colours, and iconography which Reynolds employed to produce this stunning combination of natural beauty, within a carefully constructed theatrical display.

The value and rank of every art is in proportion to the mental labor employed in it, or the mental pleasure in producing it.” 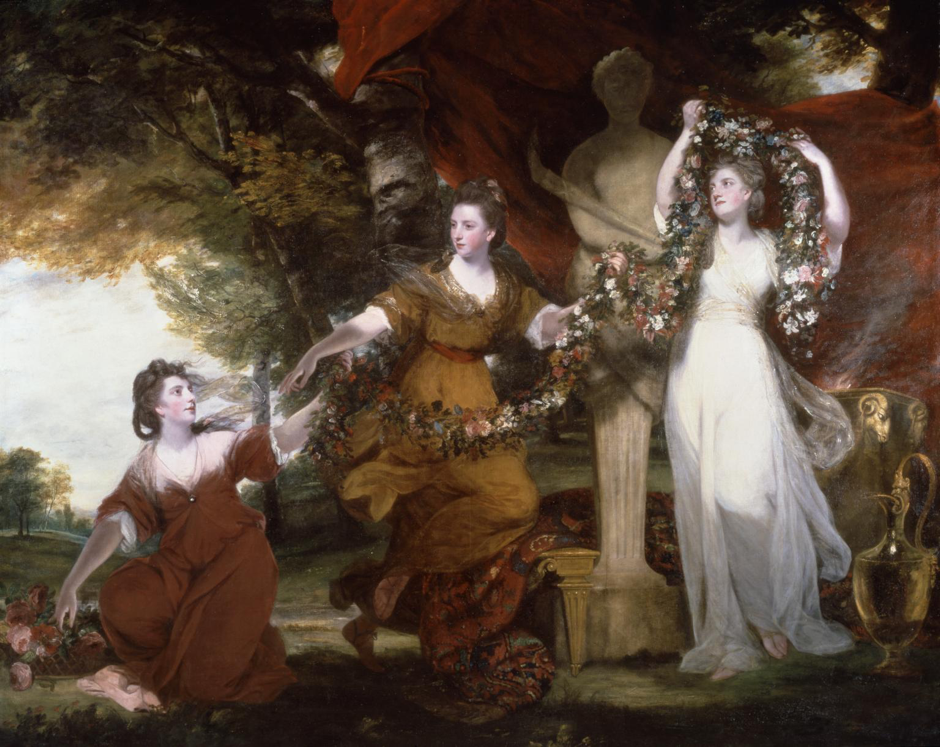 The grandness of this piece begins with its sheer size, this oil painting on canvas dwarfs its adjacent neighbours with a total size of 290 x 338 cms.  Its frame, generally in good condition, houses two layers of gold interweaved soft leaves.  With the frame depth itself of 50cms, it provides sufficient buffer between our world and the world Reynolds presents to us, merely divided by this gold wood perimeter.  Upon first glance, the ‘Three Ladies’ can be forgiven for its simplicity.  As the title suggests, these ‘Irish Graces’ of Barbara, Elizabeth and Anne, are depicted in a joyful procession of floral garnishing.  The object of their adornment is Hymen, the God of Marriage, or at least a large bust of him nestled on a base (the ‘term’).  This playful scene of celebration, almost dance-like in pose, allows us to join their fanciful celebration.  We are immediately drawn to the bottom left of the image, where the younger Montgomery sister kneels, one hand hovering over a bed of freshly picked roses, other arm outstretched to her older sibling.  Their intersection is the beginning of a garland of flowers, that joins the three sisters in unison, providing a linear connection that rapidly ascends to Elizabeth (Figure 2). 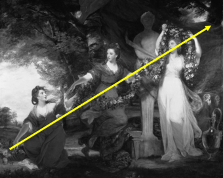 The scene is set outside, maybe as part of the Montgomery estate, somewhere between open space and wooded forest.  Reynolds presents the scene to us completely focused on the action and events unfolding.  It can be estimated that no more than 25% of the painting is landscape, with the residual dominated by the action and ensuring our complete attention (Figure 3).  Although Reynolds devotes a small portion of the painting to open space, it is powerfully utilised.  As the action unfolds, the middle sister begins her almost transidental ascent towards her older sister Elizabeth.  She casts an expectant glance down on her younger sibling, with an outstretched hand, asking her to join her on her divine ascendance.  Her pose displays a somewhat spiritual element, almost detached from our reality.  We can observe that only the frontal part of her left foot, together with only the minor support of a footstool for her right knee, provide the total support for her forward momentum.  Her expression though does not indicate any concern, almost as if she can detect the air underneath pushing her off the ground.  As our eyes navigate towards the eldest Sister Elizabeth, who at the pinnacle of this image, is almost unaware of this perfectly choreographed performance. 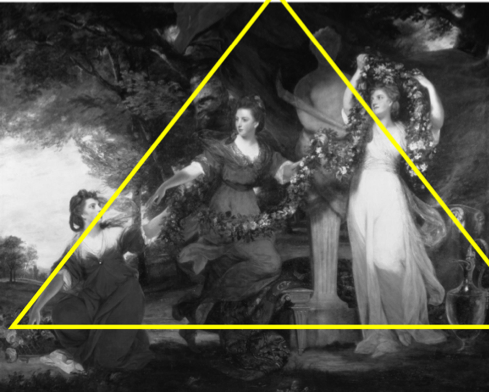 To enhance this virtuoso performance, Reynolds decides to imbue the piece with a kaleidoscope of darkish, dense colours, that evokes our sense of a chilly Autumn afternoon.  The trees have lost their bloom, and all that remains are the abundance of leafy foliage, the denseness further enhanced by their gnarly and stubbly structure, casting elaborate shadows over the stage of this balletic composition.  This canvas of bark and leaves provides an imposing backdrop, casting vast shadows over the stage of their festivities.  Our senses are not dulled however, as Reynolds cleverly uses a powerful light source from the left-hand side, which penetrates horizontally across the piece.  The incoming light serves as a fifth character almost, behind the three sisters and Hymen.  As it enters our purview, its fragments are almost magnetically (or even spiritually) targeted with meticulous precision.  On the youngest sister, it bathes the top of her scarlet gown, transforming it into brilliant white.  The light continues through the piece, illuminating the second sisters head, until it plateaus with Elizabeth.  Almost all of her body is able to bask in its attention, providing immunity against the elements.  One can sense an implied divinity associated with the use of light, as it reinforces the subjects’ purity.  Reynolds combines both the use of colour and physics to articulate an evolution of this purity.  The transition begins with the younger sister, cloaked in deep red possibly symbolising carnal passion or sexual desire.  From them we evolve into the deep-orange dress tones worn by the middle sister who stands almost in full pose, rendering a sense of neutrality.  Elizabeth then stands at full height, arms outstretched towards the heavens, dressed in striking white, representing the pinnacle of purity.  She delicately stands there, against a background of turbulent red behind Hymen, as if to remind us of the constant temptations that threaten the institution of marriage.

In keeping with the late 18th Century style, Reynolds pays due attention to both physiognomy, mimesis and clarity.  The physiognomy of the three sisters reflects a somewhat passive tone.   They are present, but there is a subtle undertone of guardedness through their muted emotions.  Neither of the sisters makes direct eye contact with each other.  The younger sister looks up at Elizabeth on the far right, with an aspirational yet cautious gaze.  The middle sibling looks down on her younger sister, confidently willing her to take that first step towards salvation.  Elizabeth however, stares out towards open space, with an expression that evokes a sense of trepidation at the inception of her new journey.  Their features are well defined through Reynolds renown precision brushwork.  Their porcelain white skin is delicately augmented with flushed rosy red cheeks, providing a visual reminder of the elements, and a stark counterpoint to their attire.  He expertly manages to apply differing shades of white and off-white, helping our visual senses determine between the incoming natural light, and the shadows cast over bare skin.  The fabrics of the respective gowns worn by the three sisters are sumptuous and elegant.  Compositionally, Reynolds uses various shades which helps create a three-dimensional perspective (like the chiaroscuro of their gowns billowing in a light breeze).  His mastery of fine detail to mimesis, allows us to almost reach out and touch the velvet creases which embellish the sinuous curves of our heroines.  Aesthetically, this piece epitomizes trademarks strongly associated with Reynolds style.  His use of mezzotint over line engraving, further enhances the contrasts between light and dark.  It is also possible that he dissolved bitumen in the oil, helping form that rich brown glaze.  Reynolds keeps the colour moderated though, underlining his philosophy of not allowing the pleasure of the eye to transcend the spectators mind.

With Grand History styles still very prominent in the latter part of the 18th Century, Roman ideals were reformulated for a modern audience.  Reynolds embraces this whole-heartedly, and infuses this trilateral portraiture with references and motifs linked to antiquity (Figure 4).  Hymen himself is an arresting symbol of marriage, which is at the very centre of this piece.  Elizabeth is flanked by other objects which are a direct lineage to the ancient world.  We can see what appears to be a vessel, perhaps for holding water.  Water has many ancient themes, and can be associated with fertility, purification of the soul, and an admission into faith.  These would be consistent with the chastity of marriage, and the purity of the institution of which she is about to enter.  We can also identify a shield, with a ram (lamb) moniker embossed the front.  The lamb can be correlated to the personification of innocence, gentleness, patience and humility, whereas the shield is an attribute of chastity (protection from the arrows of Cupid).  Finally, we can observe smoke behind the shield, possibly from a Censer.  Rising smoke (as depicted here) is traditionally symbolized as prayers ascending to heaven.  This moralising view of private family life, some may cynically claim, was a trend of a new bourgeois public at this time.  Regardless, Reynolds accomplishes his intent of using his classical references to reinforce the general themes he presents. 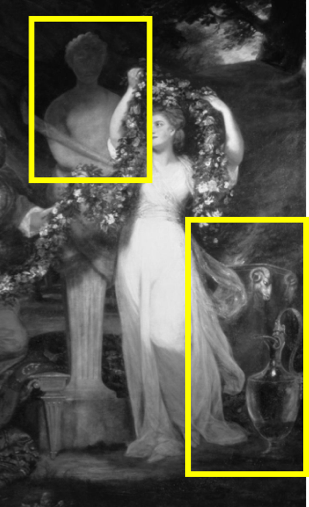 History reflects on this piece with a degree of indifference, neither considered a master-piece or otherwise.  This may be somewhat reflected in the location of its current home at the Tate.  Reynolds is credited though with his ability to structure a cohesive combination of the fine arts, poetry, painting, music, sculpture, all which have references here.  ‘Three Ladies’ is an example of the history painting style – dramatic action, emotionally intense, expressive figures and poses.  Yet it is not without it reminiscence of the Rococo style either, with its illustrations of seasons and time of day.  “Grand Machines”, as such paintings were often known, were characterised by dramatic action, emotionally intense, expressive figures and poses”.  By the inclusion of neo classism pluralism, Reynolds achieves the coexistence between the two systems of sensuality and decorative.  The European enlightenment, which was taking hold at the time, was focused on emulating, not coping, classical antiquity.  This was a perfect fit for Reynolds, who reputedly strived to create a general ‘air’ of the sitter, as opposed to an exact likeness.

Ultimately, this piece can be considered a celebration of the institution of marriage.  It uses dramatic form to illustrate humanity of a union under God.  One cannot wonder though what Gardiner made of this piece.  Yes, the sisters are in a formal enactment of celebration for their elder sisters impending nuptial.  However, is there a level of nervousness and trepidation present in the underlying tone?  Perhaps Reynolds, who himself never married, could not resist the opportunity to moderate the level of warmth and elation portrayed.  Nonetheless, this is Reynolds displaying his most comfortable style, and one which was to set the foundations of the Royal Academy of Arts (which was formed a few years earlier).  Reynolds belief in structure promoting form would ultimately be reversed, as it was in classical music compositions through Beethoven.  Reynolds would be vilified by the Pre-Raphaelite Brotherhood movement seventy-five years later, who disparagingly referred to him as “Sir Sloshua”.  For now though, ‘Three Ladies’ represents Reynolds at his boldest. 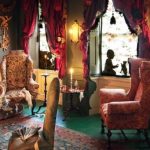 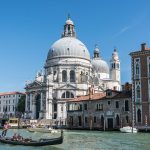