Titian | His Use of Classical Sources in his Mythological Paintings

It was the early sixteenth century, and a battle of cultural ideals was emerging.  A complex synergy of sex, landscapes, and romanticism was manifesting itself through increasingly daring artistic imagery.   The sensuality of a naked girls’ curves was dramatically associated with the rolling shapes of pastoral landscapes (like Danaë in the featured picture).  A new kind of morality was emerging.  Artists were already beginning to strive for greater creative autonomy, demanding a move away from the shackles of strictly defined programs.  Erotic art, for upper-class society and princely patrons, was outside of the control of the church, and therefore uncensored and uncontrolled.

Venetian Renaissance artist Titian (Tiziano Vecelli or Tiziano Vecellio, known in English as Titian), developed a series of mythological and allegorical compositions within this genre:

The painting ideas contained within these cycles were derived from a complex set of ancient literary texts of Ovid (Metamorphoses and Ars Amotoria), Catullus (Cormina), and Philostratus (Book I Imagines).  During the Renaisance, these texts were visually manifested in woodcuts, prints, and sarcophagi.  There appears to be a general scholarly consensus that both Ovid (Metamorphoses) and Philostratus are two sources that played a significant role of both cycles, although this is still equivocal.  So how did Titian utilise and employ them?  All of the classical texts were written in Latin, of which Titian had a limited understanding.  With his demonstrable use of vernacular (Italian) translations, together with his own style which did not naturally conform to a strict programmatic structure, this author argues that Titian’s use of primary classical sources was both inconsistent and limited, and at best was used for subject matter and inspirational purposes only. 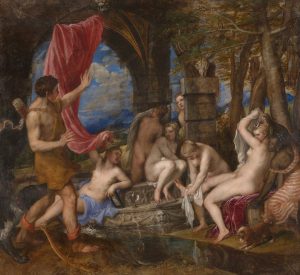 Ovid’s Metamorphoses is often thought of as the primary source for the majority of Titian’s classical mythological representations.  However, there is little evidence to suggest this was the case.  Instead, it is highly likely that Titian used a mix of primary sources.  The use of primary sources was via mythographers, who provided commentaries on classical texts. These interpretations were subject to ongoing reinvention, often creating variations in subsequent editions, which ultimately established clear distinctions from the originals.  An example of this effect is in the setting for Diana and Actaeon (opposite right).  Ovid describes this as “there was a valley clothed in hanging woods of pine and cypress, named Gargaphie.”, however it is clear in Titian’s representation that there is no visual reference to pine and cypress.  Tangentially, we witness a similiar effect in Titian’s Perseus and Andromeda (below).  Distortions exist relating to Perseus’ sword, which is “straight” in the original Ovid text version, yet in the text by Nicolo degli Agostini’s vernacular translation, it states “a curved sword”.  These distortions from primary sources was certainly wider in the Poesie cycle.  It is this widening, necessary to enable Titian’s true creativity, which was ultimately the chief component in reducing Titian’s use of subject matter. 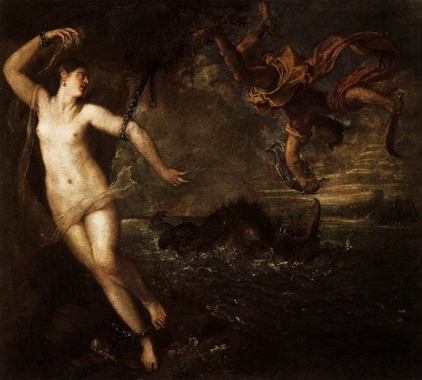 The early to mid-sixteenth century witnessed an increase in classical mythology paintings, which would have enveloped Titian’s artistic world.  It would be difficult to believe that these contemporary sources would have not influenced Titian.  Titian could have extracted specific elements from these interpretations, weaving them together with primary sources, to create highly original representations.  There are examples of this within Camerino, and we can observe how Titian added contemporary dress like the meticulously striking smart yellow trousers of the courtier in The Andrians (below in bottom-left).  In The Worship of Venus, the painted Venus is almost identical to a gilt-bronze statuette owned by Alfonso’s sister Isabella.  Scholars have hypothesized that contemporary visual models played a critical part in the formation of these works, and thus Titian productions could not have been shaped entirely on verbatim primary sources. 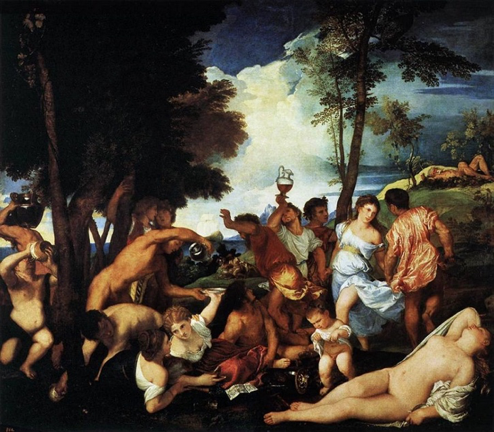 There are those however who present arguments that Titian’s mythological oeuvre was more formulaic, and based on greater specificity by his literary sources or patrons.  There appears to be a scholarly consensus that Ovid and Philostratus were sources that Titian took most of his narrative inspriation from.  We know the texts of Philostratus were circulating in manuscript at the time of Titian’s creation of Camerino.  Within Camerino, Philostratus Book I Imagines provided a detailed description of the island of Andros for Titian’s The Andrians.  It could be that Titian continued to employ the use of Philostratus in the first of the Camerino series The Worship of Venus (below).  In Book I of Imagines, Philostratus lays out Cupids in a detail which is consistent with Titian’s composition.  It is easy then to conclude that Titian used the source narrative to construct a close literal interpretation, but we have to concede this may not have been exclusively. 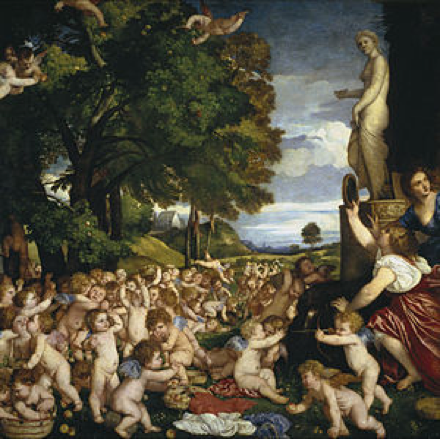 Titian compressed several individual action sequences into a single visual narrative, which seems intuitive given his desire to achieve poetry through painting.  Text, prints, sarcophagi, and woodcuts would all provide visual inspiration to Titian, and thus enable a more original renderings (Bernard Salomon set of woodcuts & prints the Metamorphose d’Ovide figure, and Titian’s humanist friend Ludovico Dolce’s woodcut creation of Transformationi, are both good examples of this).  These hetrogeneous models, juxtaposed together, could have yielded creative inspiration for his highly original canvases.  The effects of historical text translation, the numerous visual modes of interpretations surrounding Titian, and his own creative raison d’etre, were probably the chief components in reducing Titian’s use of subject matter, and thus bringing us these original and erotically charged renderings. 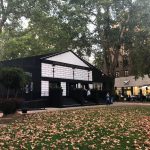 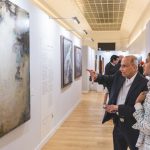